People say as a photographer I have a sensitive eye; an ability to draw out and capture the deepest essence and transcendental nature of my subjects whether they are human, flora or fauna.

I came to the United Kingdom from America in 1970 and have had a series of successful careers; first as a primary documenter of the punk era , then as a successful commercial photographer in advertising and editorial and more recently as the author of photographic books featuring works of my own private passions.

In my music career I was known for photographing leading entertainment and music industry artists in both Classical and Pop/Rock. For many years I did press and publicity for institutions such as the Royal Opera and the Royal Ballet and the Barbican London.

My current work is more personal photographs, recently published in a series of books available as images in galleries.

In 2003, I published my first book. SERA - the way of the Tibetan Monk - a monograph on Tibetan monastic life ( Columbia University Press). The accompanying exhibitions showed in London, New York , Turin , and Berlin.

My second book, PUNK+ is a document of the London 70s punk scene and published in 2013 (FirstThirdBooks) . Exhibitions followed in London, Paris and Berlin . In 2014, I had a touring exhibition of Punk in Tokyo, Shanghai, Hong kong and Singapore.

My latest book, TOUGH & TENDER is a delicate and sensitive report from the English seaside and published in 2015 ( Kehrer Books).

In 2015, I launched TOUGH & TENDER in Liverpool ( Look Photo Festival ) . I also showed my Seascape portraits at the Johanna Breede Gallery in Berlin and at the Agnes B Gallery at Paris Photo.

My work is in the permanent collection of the National Portrait Gallery, London.

I live in London, travel frequently, and maintain a home in Hawaii. 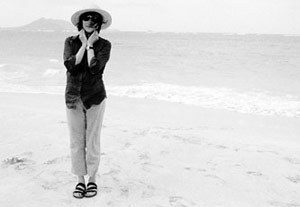